TDoR: The Best Decision I Ever Made - Riley's Story 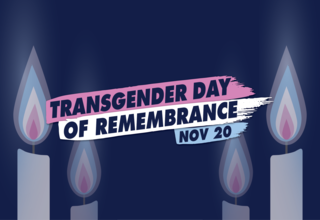 You may not have been aware, but around the second week of November, each year is Trans Awareness Week, a whole week of highlighting and celebrating the lives and achievements of transgender people worldwide. The week marks the run-up to today, Trans Day of Remembrance, upon which we contemplate the lives lost each year due to transphobic violence and unite in solidarity with our transgender siblings who cannot be themselves without risking or fearing for their lives. It is a difficult day for so many of us.

When I was asked to write this piece, I was posed the question ‘what would you like to see on TDoR?’ As there will be no shortage of articles out there covering whatever vigils will be possible in these bizarre and uncertain times, discussing death tolls and dissecting social stigmas, I’m opting instead to offer you my experience of coming out as transgender, and why it was the best decision I ever made.

The year was 2017, and I was two years into my second attempt at my degree here at the University of Cumbria. I had already pulled out of the course once due to suffering extreme depression and anxiety, caused in no small part by the fact that I was struggling with gender dysphoria - the constant, bone-deep feeling of wrongness that nags at you day and night until you realise, bit by bit or all at once, that you might not be the gender you thought you were. Desperate for an answer, I trawled the internet for resources and found a video series called ‘True Trans’ by Laura Jane Grace, a trans woman from the United States who began her transition at 32 while she was the lead singer of an internationally successful band. Her accounts of her experiences resonated with me instantly. Now, with the final assignments of my second year looming, I was hit with the gut-wrenching realisation that if I didn’t transition myself, I might never be truly happy.

It’s difficult to describe in so few words the immensity of the journey that lay ahead of me, or how it’s actually not as petrifying as it sounds (seriously!), but I’ll give it my best shot. After a lot – and I mean a lot – of soul-searching, I realised that I am, in essence, a nonbinary person assigned ‘male’ at birth who has a very complicated relationship with gender and whose nearest approximation to a stable gender identity was as a transgender woman. “Okay”, I thought, “so I’m a trans woman. What now?”

I settled on changing my name, to get as far away from my masculine given name as possible, and informed as many people as I could that I would be using ‘she’ and ‘they’ pronouns with immediate effect. When I was next at home I came out to my parents, the most nerve-shredding conversation I have ever had in my life, and set up new social media accounts reflecting my chosen name and pronouns. Deleting Facebook has never felt so good.

After completing a deed poll and spending the summer presenting it at various desks and offices – including at Cumbria’s Lancaster campus – I was all set, with my student ID and even my passport updated to reflect my ongoing transition. I officially came out to my coursemates (some of whom were already aware) via our group chat and informed my lecturers via email in advance of the new term, which was actually less scary than my viva later that semester.

With the administrative aspects out of the way and finally feeling less like a dysphoric husk and more like a human being, I was finally able to focus fully on my studies. In summer of 2018, I graduated and was presented with my degree certificate awarding a 2:1 in English Literature to Riley Freya Rose Reed. That same year, after much waiting and correspondence with the relevant medical professionals, I began hormone replacement therapy and the medical aspect of transitioning. I haven’t looked back since.

Some people know they’re transgender from the earliest days of their childhood. Some realise it in adolescence, some in young adulthood like I did, and some in their middle age and beyond. If any of what you’ve read here has reminded you of something you’ve felt, or are feeling, you are not alone. It’s okay to closely examine and experiment with your gender identity and presentation. Maybe you’d feel more comfortable with a different pronoun, for example – in the early stages of my transition I asked people to use the neutral ‘they’, rather than ‘he’, to refer to me, and it felt like a weight had been lifted off my heart when I was no longer being actively misgendered on a daily basis.

If you’re cisgender – someone who is not transgender and identifies comfortably with the gender they were assigned at birth – consider the privilege you have and ask yourself how you can help the transgender and nonbinary people you may know or encounter. Normalising expressing our pronouns helps avoid instances of misgendering, and it only takes a few words – you can sign off an email with ‘Sarah (she/her)’, or add them to your social media bio. Even these small acts can go a long way toward making trans and nonbinary people feel safer and more welcomed in our society and spaces.

It’s a difficult time, in what has been an especially unusual and troublesome year. Thank you for taking the time to read about my experiences. If you’re cis, I hope you’ve found this informative and enlightening. If you’re trans – I see you. Thank you for your courage. We all need each other, now more so than ever. I wish everyone reading this the best of luck with the rest of 2020, and with whatever lays ahead for all of us.

Transgender Day of Remembrance is observed on the 20th of November.

Forbes estimates that 350 transgender and nonbinary people worldwide died as a result of transphobic violence in 2020.